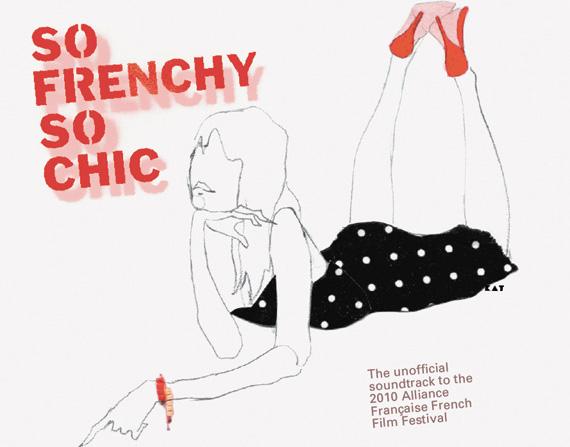 So Frenchy So Chic is released once a year. It has become a ‘French rendez vous’ for the Australian community. It reached #9 in the ARIA Chart, making it the first French-speaking album to reach such rank. It showcases the latest music from France across an eclectic range of genres. It is the unofficial soundtrack to the French Film Festival who gathers each year over 80,000 Francophiles nationally. (Number 1 Foreign Film Festival in Australia).

The sixth unofficial soundtrack to the French Film Festival, like all those before it, is a superb, high-spirited collection of the latest musical gems from a diverse range of French musical genres.

Featuring 34 irresistible new tracks over two discs from artists including Nouvelle Vague, Charlotte Gainsbourg, Emmanuelle Seigner (actress and wife of director Roman Polanski) and ‘M’ (who featured on the soundtrack to the animated French film The Triplets of Belleville).

So Frenchy So Chic 2010 is a must-have for fans of the collections or for those who are yet to discover it’s enchantment!

So Frenchy So Chic

END_OF_DOCUMENT_TOKEN_TO_BE_REPLACED

Continuing the fabulous compilations of the past few years comes So Frenchy So Chic 2015, featuring an amazing lineup, including Emilie Simon, The Dø, La Femme, Francois & The Atlas Mountains and more!

The best new music to come out of France over the past twelve months. Discover: La Femme, Babx, Fauve, Yucca Velux and some of the SFSC favourites unveiling their new works: Fefe, Babylon Circus, Moriarty... and more.