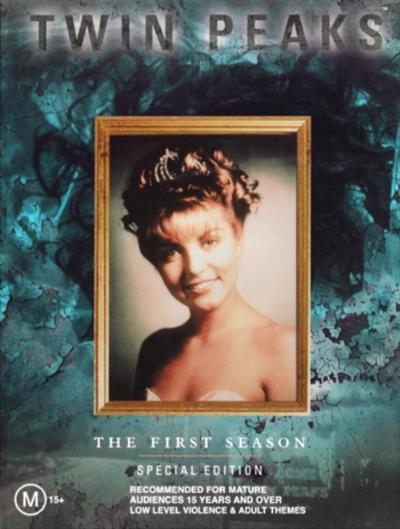 This release includes the first season of director David Lynch’s shockingly original television series.
When its two-hour pilot episode aired on April 8, 1990, the program forever changed the face of prime-time television. A bizarre, ingenious, hysterical, terrifying murder mystery set in the Pacific Northwest logging town of Twin Peaks, the series opens with the discovery of the body of Laura Palmer (Sheryl Lee), a seemingly straitlaced high school student.
Assigned to the case is FBI Special Agent Dale Cooper (Kyle MacLachlan), a quirky man who converses regularly with Diane, his portable tape recorder. As Cooper settles into his life in Twin Peaks, he meets a revolving cast of characters who are all off-kilter in their own personal way.
Gradually, the town’s facade of extreme normality begins to crack mightily, revealing an endless barrage of schemes, fronts, and hidden relationships that expose Twin Peaks as the disturbed, unsettling town that it is.
$19.95Add to basket ›

END_OF_DOCUMENT_TOKEN_TO_BE_REPLACED

Twin Peaks - Fire Walk With Me

END_OF_DOCUMENT_TOKEN_TO_BE_REPLACED

The Secret History of Twin Peaks

Twin Peaks - Fire Walk With Me

Twin Peaks FAQ: All That’s Left to Know About a Place Both Wonderful and Strange

END_OF_DOCUMENT_TOKEN_TO_BE_REPLACED

A bizarre, ingenious, hysterical, terrifying murder mystery set in the Pacific Northwest logging town of Twin Peaks, the series opens with the discovery of the body of Laura Palmer (Sheryl Lee), a seemingly straitlaced high school...

From Mark Frost and David Lynch (The Elephant Man, Blue Velvet and Mulholland Drive) comes the wildly imaginative, darkly comic mystery thriller series that became one of the most acclaimed events in...

3 DVD's. Twin Peaks Season 2, Part 1 continues the hunt for the killer of Twin Peaks homecoming queen Laura Palmer, but it's Special Agent Dale Cooper who comes under investigation when he is...