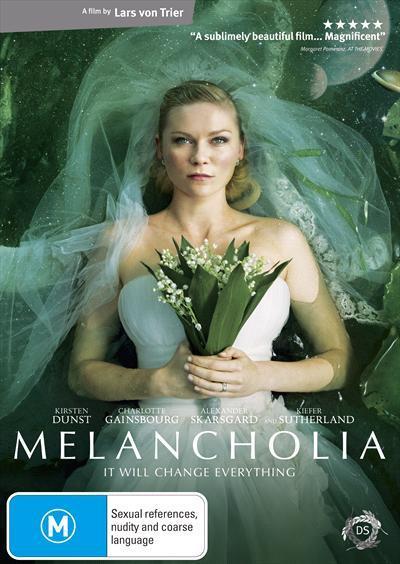 Justine (Kirsten Dunst) and Michael (Alexander Skarsgård) are celebrating their marriage at a sumptuous party in the home of her sister (Charlotte Gainsbourg) and brother-in-law (Kiefer Sutherland). Meanwhile, the planet, Melancholia, is heading towards Earth…
Melancholia is a psychological disaster movie from director Lars von Trier.

Melancholia is the most accessible film yet from self-styled provocateur Lars von Trier (Dancer in the Dark, Antichrist) and it’s likely to go down as his masterwork.

Like other recent stand-out releases The Tree of Life and Take Shelter, von Trier’s meditation on depression – in all of its guises – boldly contrasts the quotidian with the cosmic. Kirsten Dunst and Charlotte Gainsbourg are sisters awaiting certain apocalypse when a rogue planet sets a collision course for Earth.

Keifer Sutherland, Charlotte Rampling, Stellan and Alexander Skarsgård, and an impish John Hurt round out a stellar support cast.

Two sisters find their already strained relationship challenged as a mysterious new planet threatens to collide into the Earth in this psychological disaster movie from director Lars von Trier.

We Need To Talk About Kevin (DVD)

Based on the million-selling Orange Prize winning novel by Lionel Shriver and directed by acclaimed film-maker Lynne Ramsay, We Need to Talk About Kevin is an emotional thriller starring Academy Award winner Tilda Swinton, Academy...