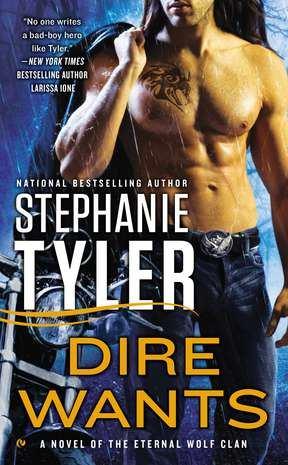 The full moon is their mistress. They are predators of pleasure and pain. Feared by humans, envied by werewolves, the Dire wolves are immortal shifters, obeying no laws but their own bestial natures. Once they were many, but now only eight remain, a dangerous wolfpack forever on the hunt … The supernatural world is rising up against the human one. The weretrappers want to control the humans, and only the immortal Dire wolves stand in the way of total destruction. Stray, a Dire, and his long-lost brother, Killian, emerge as the leaders of their pack. To keep themselves and the humans safe, the Dires must find a witch as powerful as the one who has been helping the weretrappers. They find what they are looking for in Kate, a human who survived a horrible car accident that left her back scarred with a handprint no one else is able to see. Stray senses in Kate the powers of a witch and recruits her to help the Dires - all the while knowing that she is so powerful that they will need to kill her once she helps defeat the weretrappers. Stray doesn’t expect the powerful connection that he feels with Kate, or his irresistible need to protect her. They cannot hide their feelings for each other, and what once was taboo now seems inevitable … Praise for Dire Needs ‘Fast-paced, dark, and wickedly edgy.’ New York Times bestselling author Larissa Ione ‘These Dire wolves are going to rock the paranormal world.’ New York Times bestselling author Alexandra Ivy ‘A raw, sexy world.’ New York Times bestselling author Maya Banks