Tales from the Political Trenches 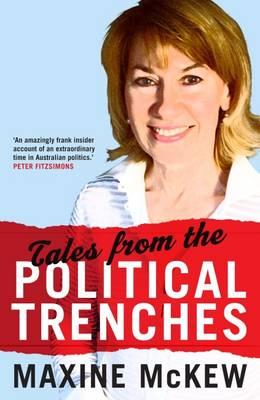 Tales from the Political Trenches

Julia Gillard was impatient for the prime ministership, and either worked with or allowed others to manufacture a sense of crisis around Rudd s leadership. She then cut down a prime minister in his first term and tried to pretend it was in the national interest to do so. Since then, she has been the architect of her own misfortune.‘ In Tales from the Political Trenches Maxine McKew counters the view that Julia Gillard was a reluctant deputy who was forced to move against a chaotic and dysfunctional Kevin Rudd-and offers a different version of events. Her story is an intimate account of one of the most tumultuous periods in Australian politics, as well as a tale of personal change. She brings a reporter’s eye and an insider’s knowledge to a story that has caused despair among Labor supporters and produced disillusionment among the electorate. After winning a spectacular victory against Prime Minister John Howard in 2007, McKew was one of the many casualties of the disastrous 2010 election campaign, when Labor was left clinging to the wreckage and forced into minority government. Still dealing with her own disappointments in a political career cut short by t

This extraordinarily frank account by Maxine McKew of her rapid rise and fall in Australian politics, and her scathing view of the removal of Kevin Rudd as Prime Minster, does few favours to her parliamentary colleagues.

Early on, McKew tells a moving story about the influences that shaped her. She touches on childhood, her mother’s premature death at 33 – and how a combination of missteps, good fortune and hard work led to a stellar career in journalism and, ultimately, her preselection to contest the seat of Bennelong in the 2007 election, held by then Prime Minister John Howard.

She tells with warmth and humour the story of her campaign, peppered with anecdotes about diehard volunteers and the constituents she met during months of doorknocking. Her generosity and integrity are often on show: ‘I aimed to present a positive face and to never belittle my opponent.’ Yet this prefect-like comment suggests McKew was not sufficiently cognisant of the savagery of political contests, later proved by Rudd’s political execution and the personal attacks made against her during the 2010 election.

It can’t have been easy for McKew going from being top dog in journalism to being on the outer circle when she stepped into Parliament. You can track her girlish excitement and idealistic determination to make a difference being replaced by disappointment and bitterness as she felt sidelined by then Deputy Prime Minister Gillard, who didn’t consult with her as much as she’d expected.

For true believers, McKew’s rumination on issues that may be electorally sensitive will feel like a betrayal. Yet, regardless of how you view it, this is a sobering tale of an idealist losing her innocence in the brutal world of Australian politics.

Clare Kennedy is a freelance writer and reviewer.