Invisible Armies: An Epic History of Guerrilla Warfare from Ancient Times to the Present 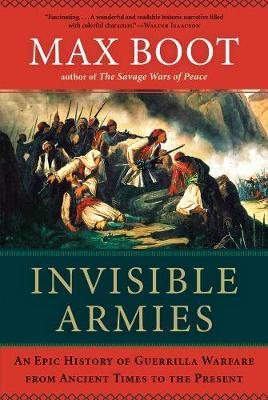 Invisible Armies: An Epic History of Guerrilla Warfare from Ancient Times to the Present

Beginning with the first insurgencies in the ancient world-when Alexander the Great discovered that fleet nomads were harder to defeat than massive conventional armies-Max Boot, best-selling author and military advisor in Iraq and Afghanistan, masterfully guides us from the Jewish rebellion against the Roman Empire up through the horrors of the French-Indochina War and the shadowy, post-9/11 battlefields of today. Relying on a diverse cast of unforgettable characters-not only Mao and Che but also the legendary Italian nationalist Giuseppe Garibaldi, the archaeologist-turned-military commander T. E. Lawrence, and the Quiet American Edward Lansdale, among others-Boot explodes everything we thought we knew about unconventional combat. The result is both an enthralling read and our most important work on nontraditional warfare.