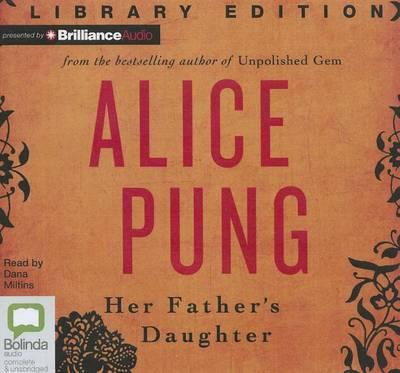 At twenty-something, Alice is eager for the milestones of adulthood- leaving home, choosing a career, finding friendship and love on her own terms. But with each step she takes she feels the sharp tug of invisible threads- the love and worry of her parents, who want more than anything to keep her from harm. Her father fears for her safety to an extraordinary degree - but why? As she digs further into her father’s story, Alice embarks on a journey of painful discovery- of memories lost and found, of her own fears for the future, of history and how it echoes down the years. Set in Melbourne, China and Cambodia, Her Father’s Daughter captures a father - daughter relationship in a moving and astonishingly powerful way. Winner of the non-fiction prize in the 2011 WA Premier’s Book Awards Shortlisted for the non-fiction prize in the 2012 Victorian Premier’s Literary Awards and the 2012 Queensland Literary Awards ‘Alice Pung is a gem. Her voice is the real thing.’ Amy Tan ‘A beautiful exploration of father-daughter relationships.’ Vogue ‘Remarkably tender and thoughtful.’ The Sunday Age ‘Pung has an extraordinary story to tell and the finesse to bring it, most movingly, to the page.’ The Monthly