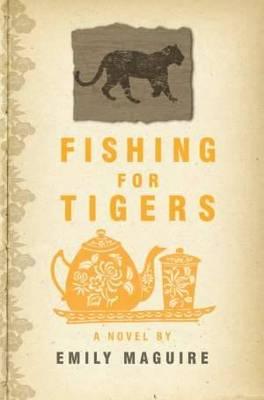 Six years ago, Mischa Reese left her abusive husband and suffocating life in California and reinvented herself in steamy, chaotic Hanoi. In Vietnam, she finds satisfying work and enjoys a life of relative luxury and personal freedom. Thirty-five and single, Mischa believes that romance and passion are for teenagers; a view with which her cynical, promiscuous expat friends agree. But then a friend introduces Mischa to his visiting eighteen-year-old son.
Cal is a strikingly attractive Vietnamese-Australian boy, but he’s resentful of his father, and of the nation which has stolen him away. His beauty and righteous idealism awaken something in Mischa and the two launch into an affair that threatens Mischa’s friendships and reputation and challenges her sense of herself as unselfish and good.
Set among the louche world of Hanoi’s expatriate community, Fishing for Tigers is about a woman struggling with the morality of finding peace in a war-haunted city, personal fulfilment in the midst of poverty and sexual joy with a vulnerable youth.

Mischa is a 35-year-old woman who left her abusive marriage six years ago to settle in Vietnam. When she meets Cal, a passionate and attractive 18-year-old, they begin an affair. Cue steamy sex scenes.

The relationship between Mischa and Cal is a challenging one. Maguire doesn’t try to kid us that Cal is a mature-for-his-age young man ready for this relationship; she openly explores the complex dynamic that could develop between a grown-up woman and a sometimes-sulky teenager who are attracted to each other, both physically and mentally.

Their attraction is not easy to define; there’s motherly affection in there and definite lust. Mischa thinks almost obsessively of Cal’s physicality, as though seeking to reclaim her youth and, except for one scene where Mischa expresses surprise that Cal is interested in her at all, she seems relatively disinterested in her own body.

Yet the underlying love affair in this novel is the one Mischa has with her chosen home, Hanoi, and again this is more complicated than it first appears. While Mischa’s strong feelings for Vietnam are evident, there’s a strange disparity here. Despite being obviously eager to discover the folklore and customs of this culture, Mischa has also never applied herself to learn the language or connect directly with Vietnamese people. Instead, she has formed superficial friendships with the expat community and these friends, who are occasionally comic relief and more frequently obnoxious, read dangerously close to being caricatures.

In contrast, Maguire’s re-imagining of Vietnam is compelling and vibrant, complete with the smell of ‘fish sauce and sewerage and charcoal and pork’, and ‘whole roasted dog in the marketplace’. This book vividly captures the atmosphere of being overwhelmed by a strange city, positioning Mischa as our guide for learning more about the hidden culture. For someone who has never travelled there, I felt it very much came to life for me within these pages.

END_OF_DOCUMENT_TOKEN_TO_BE_REPLACED

Emily Maguire ignites discussion on issues relevant to teenagers. Drawing on her adolescence and the experiences faced by teens today, Maguire looks for answers and a way forward. This personal and illuminating book is a bridge to...

This sharp, funny and insightful book reveals how the treatment of young women as fragile or in need of male assistance can be as objectifying and damaging to women as pornography and raunch culture. Australian author.