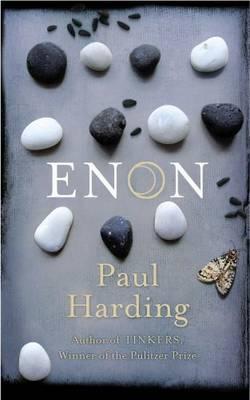 Hailed as a masterpiece, Tinkers, Paul Harding’s Pulitzer Prize-winning debut, is a modern classic. Here, in Enon, Harding follows a year in the life of Charlie Crosby as he tries to come to terms with a shattering personal tragedy. Grandson of George Crosby (the protagonist of Tinkers), Charlie inhabits the same dynamic landscape of New England, its seasons mirroring his turbulent emotional odyssey. Along the way, Charlie’s encounters are brought to life by his wit, his insights into history, and his yearning to understand the big questions.
A stunning mosaic of human experience, Enon affirms Paul Harding as one of the most gifted and profound writers of his generation.

Following the enormous success of Paul Harding’s debut novel, Tinkers (which won him a Pulitzer Prize in 2009), the literary world, and the many fans of Tinkers, have understandably been waiting with bated breath to see what he does next. His second novel, Enon, is similar to his first in many ways. It shares the same small-town, New England setting, its main character is Charles Crosby, who is the grandson of Tinkers’ protagonist George Crosby, and it is concerned with themes of death, history and landscape.

But Enon is a far more personal, insular story than Tinkers, and has a more intense focus: while the narrative scope of the book is narrower, the writing is no less ambitious and poetic.

We meet Charlie Crosby in the immediate aftermath of losing his 13-year-old daughter, Kate, in a road accident. The book opens with a jarringly insistent pathos and we are thrust, without warning, into the presence of his shock and hysterical grief. In the opening chapters, Harding’s assured writing captures both the frenetic splutter of thoughts had during unfathomable pain and the anchorless nature of a person’s behaviour in the wake of tragedy. The story then follows Charlie as he sinks further into himself, and tries to make sense of his new reality.

There are many facets to Charlie’s grief, from his struggles with memories and hallucinations to his evolving relationship with the landscape that he once shared with Kate. Harding has a powerful sense of the texture in his language, and describes Charlie’s experiences through clear and unusual prose. It is not always flawlessly executed: the infrequent dialogue is at times clunky and clichéd, and some of his metaphors don’t quite hit their mark. But fans of Tinkers, and lovers of deeply thoughtful writing, will certainly find much to appreciate here.

Charlotte Colwill works as a bookseller at Readings St Kilda.