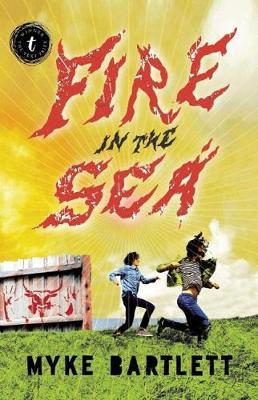 Winner of the Text Prize for Young Adult and Children’s Writing, 2011

Sadie is sixteen and bored with life in Perth. It’s summer, and lazing on the beach in the stifling heat with her cousins and Tom is a drag. Then something comes out of the sea.

Dark menacing forms attack an old man, leaving him for dead and Sadie wracking her brains to understand what she saw. Then there’s a mysterious inheritance, a strange young man called Jake and a horned beast trampling the back yard.

Sadie finds herself caught in the middle of an ancient conflict that is nearing its final battle, a showdown that threatens to engulf Perth and all those she loves in a furious tsunami.

Fire in the Sea is a fast-paced thrilling adventure with a feisty heroine who is not afraid to fight for what she knows is right.

Reimagined visions of Australia in YA books

END_OF_DOCUMENT_TOKEN_TO_BE_REPLACED

The Tribe Book 1: The Interrogation of Ashala Wolf

How To Be Happy: A Memoir of Sex, Love and Teenage Confusion