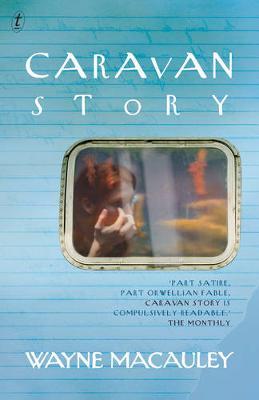 The first caravans arrive in a convoy. Wayne Macauley’s narrator, Wayne Macauley, is in one of them. He’s one of the artists removed from his home, given a new place to live and the chance to ‘give back to society’.
In his strange new community, housed on a footy oval in a faraway country town, he is given his task. To create and be useful. To be thankful for the opportunity. He decides he will not give in to his misgivings; he will write. Then he finds out about the rejection slips already written for the work he has yet to submit…

In 2004 Macauley published Blueprints for a Barbed-Wire Canoe to great acclaim, with one critic even going so far as to say that if more Australian literature was of this calibre, wed be laughing. On the strength of this, his second book, I must say I entirely agree! But as much as the art of this book - its surreal, dreamlike atmosphere, its memorable cast of slightly sinister characters (a la Kafka) - seduces the reader, what really excites is Macauleys provocative cultural intervention.

The central premise is a not-sofar- away-as-you-might-think radical utilitarianisation of the arts in Australian culture. A young couple, one a writer named Wayne Macauley, the other an actor, are removed from their inner-urban lodgings and taken by caravan to the local football oval at a small town in the Victorian countryside. There they find themselves in a new community of like-minded cultural workers. Somewhat confused, Wayne begins work on his writing until it becomes apparent that the communitys material is simply ending up in the garbage bin. The select few get the opportunity to render themselves possibly useful by generating scripts for film or TV; the others simply vanish. His girlfriend, on the other hand, finds that her profession at least is deemed to have its uses she finds herself on the road seven days a week in a travelling troupe, providing entertainment for demoralised country towns suffering from the drought, or making TV commercials. But in the camp, more artists are being bussed in, its full to overflowing (in need of a final solution, in fact).

A lament but also a call to arms, Caravan Story is a thrilling piece of satire, a compulsively readable, extremely well-wrought Orwellian fable that I believe announces the arrival of Macauley as a major Australian writer, one who definitely has something to say.

Martin Shaw is from Readings Carlton

Blueprints for a barbed-Wire Canoe