Get Well Soon! My (Un)Brilliant Career as a Nurse 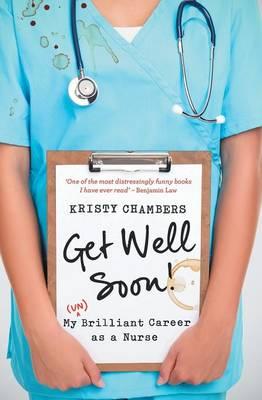 Get Well Soon! My (Un)Brilliant Career as a Nurse

My quest for a career started early, when I was four years old and gave myself a haircut to see if I liked that sort of thing. I liked it plenty, but my mother did not. Much later in life, after moonlighting as a maid and enduring myriad other unsatisfying positions, I fell into nursing, the way one may fall into a pile of sheep shit at two in the morning (which I have also done). Aged thirty, I was spat out of university with a degree in nursing and a sense of bewilderment. I was dumb with wonder- I wondered why on earth I hadn’t studied something else, like furniture design. I like chairs. My first day in hospital was a baptism of fire, but a pointed reminder that buried beneath my foul mouth was a kind heart, and I had been given an opportunity to use it on a daily basis. I like chairs and sick people. Nursing has been both a hellride and a joyride, but brutally educational most of all. I have learnt to be more specific when handing a patient a clear plastic jar with a yellow lid and asking for a ‘sample’. If I don’t explicitly ask for urine, then I really shouldn’t complain when I’m handed back a container filled with poo. Frankly, it could have been worse. At least it was in a container. ‘I lost track of how many times Get Well Soon! left me stupid with laughter, beating my thigh and begging for mercy.’ Benjamin Law