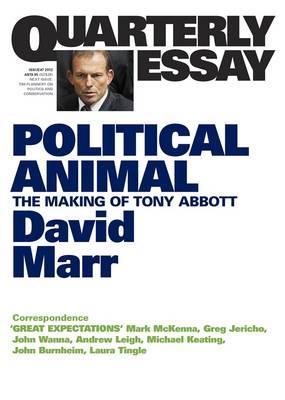 Tony Abbott is the most successful Opposition leader of the last forty years, but he has never been popular. Now Australians want to know- what kind of man is he, and how would he perform as prime minister? In this dramatic portrait, David Marr shows that as a young Catholic warrior at university, Abbott was already a brutally effective politician. He later led the way in defeating the republic and, as the self-proclaimed ‘political love child’ of John Howard, rose rapidly in the Liberal Party. His reputation as a head-kicker and hard-liner made him an unlikely leader, but when the time came, his opposition to the emissions trading scheme proved decisive. Marr shows that Abbott thrives on chaos and conflict. Part fighter and part charmer, he is deeply religious and deeply political. What happens, then, when his values clash with his need to win? This is the great puzzle of his career, but the closer he is to taking power, the more guarded he has become. ‘Since witnessing the Hewson catastrophe at first hand, Abbott has worn a mask. He has grown and changed. Life and politics have taught him a great deal. But how this has shaped the fundamental Abbott is carefully obscured. What has been abandoned? What is merely hidden on the road to power? What makes people so uneasy about Abbott is the sense that he is biding his time, that there is a very hard operator somewhere behind that mask, waiting for power.’ David Marr, Political Animal

Picture Tony Abbott posing for one of those ceremonial G20 Summit class photos. Second from the back row, his skin-and-bone face – the face of a man well exercised – is wearing a smile. As the cameras move into position, world leaders chatter happily. Abbott exchanges a knowing look with Barack Obama and gives Francois Holland a thumbs-up. Let’s give this hallucination a name: Tony Abbott, Australian Prime Minister. Have you considered the possibility?

Had I been asked that question prior to reading David Marr’s quarterly essay, Political Animal: The Making of Tony Abbott, I would have answered, casually, but in the affirmative (‘Of course, he’s the opposition leader after all’) – and I’d have been wrong. I know that now. Marr’s essay awoke me to a scenario that I’d never really taken seriously, but one that to some people seems unavoidable and to others unthinkable.

Political Animal is a portrait of one of the least popular politicians of our time who also happens to be one of the most successful opposition leaders ever. As Marr states, ‘To be so disliked should, by all the old rules, make Abbott roadkill […] but as things stand now this unlikely man is heading for a magnificent victory.’ For anyone who doesn’t read Marr’s essay, here’s the take-away: the Mad Monk is not to be trifled with.

Marr has thoroughly researched not just Abbott’s career, but also his entire life of enthusiasm for social tradition and religion. Some foot-in-mouth one-liners are revisited. As Marr points out, when Abbott mocked Gillard for attending the royal wedding, ‘in a single sentence, he managed to abuse the prime minister, all de facto couples, everyone who doesn’t believe in God, and republicans.’ But most of the essay is spent breaking new ground, presenting an incredibly up-to-date understanding of Abbott’s values and political ambitions.

Political Animal is a fascinating essay; by November 2013 it may also be an historic document, a portrait of a Prime Minister.