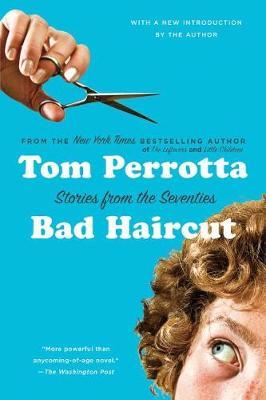 New York Times bestselling author Tom Perrotta’s first book is more powerful than any coming-of-age novel –The Washington Post Bad Haircut explores the themes that have fascinated Perrotta throughout his career: suburban rituals and mores; sports and religion; the cheerful cheesiness of American consumer life; public tests of manliness; and the moral dilemmas faced by ordinary people, parents, and teenagers alike. Perrotta has continued to explore these subjects in novels from Election to The Abstinence Teacher. The ten rich stories here are linked by a single protagonist: Buddy, an adolescent suburban New Jersey boy who is truly seeing his world for the first time and already finding it both mysterious and lacking. Whether he’s out on a Boy Scout trip with his mother and discovering that his mother actually knows–and has a history with–the man inside the battered foam hot dog costume in The Weiner Man, feeling the first glimmer that sex might actually be possible for him in Thirteen, or finding himself swept along on a prank gone very wrong in Snowman, Buddy is both a recognizable American boy and a trademark Perrotta hero. Bad Haircut is a moving, spare book from a writer who, even this early in his career, had an assured sense of the complexity of his characters' emotional landscapes.