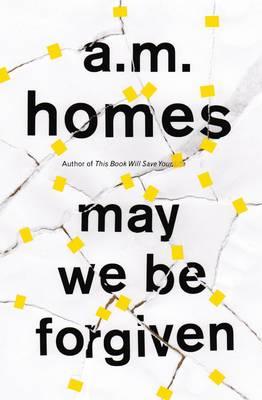 Harold Silver has spent a lifetime watching his younger brother, George, a taller, smarter, and more successful high-flying TV executive, acquire a covetable wife, two kids, and a beautiful home in the suburbs of New York City. But Harry, a historian and Nixon scholar, also knows George has a murderous temper, and when George loses control the result is an act of violence so shocking that both brothers are hurled into entirely new lives in which they both must seek absolution. Harry finds himself suddenly playing parent to his brother’s two adolescent children, tumbling down the rabbit hole of Internet sex, dealing with aging parents who move through time like travelers on a fantastic voyage. As Harry builds a twenty-first-century family created by choice rather than biology, we become all the more aware of the ways in which our history, both personal and political, can become our destiny and either compel us to repeat our errors or be the catalyst for change. May We Be Forgiven is an unnerving, funny tale of unexpected intimacies and of how one deeply fractured family might begin to put itself back together.

Every now and then you stumble across a writer that rocks your world. A.M. Homes has certainly rocked mine.

Described by The Guardian as having ‘the narrative intensity of Jonathan Franzen’s The Corrections and the emotional punch of Siri Hustvedt’s What I Loved ’ – two of my favourites – suburban life in the twenty-first century has never been so disturbingly funny than when seen through the piercing glare of Homes.

May We Be Forgiven focuses on two brothers. Harold Silver (Harry), a Richard Nixon scholar, has spent his life in the shadow of younger brother, George, a taller, smarter, high-flying TV exec. While George has a beautiful wife, two kids and a big home in the suburbs of New York City, he also has a crazy temper. When George loses total control one day, this act of violence changes both brothers’ lives forever.

The narrative initially revolves around the mystery of what really happened to George when he crashed his car and killed two people. (But Harry certainly shouldn’t be left off the hook. While he seems quite harmless from the outside, he is having sex with his brother’s wife while George is seriously injured in hospital.)

However, the real story unfolds when we are confronted with the question of whether Harry is going to cope with his life imploding as he is hurled into the role of the parent, forced to care for his brother’s two adolescent children. His marriage crumbles and he dabbles in internet sex, reignites his passion for Nixon and attempts to make overcompensatory amends to the boy who was orphaned in George’s car crash. Against all odds, Harry builds a new family life created by choice rather than biology.

May We Be Forgiven is ultimately a story of dysfunctional families, forgiveness, the human craving for intimacy, the illusion of success and personal transformation. It is no wonder Homes has turned to television in recent years, writing for The L Word and currently developing a new major US TV series for HBO called The Hamptons.

I now can’t wait to read what is known as Homes’ previous bestselling novel, This Book Will Save Your Life.

Emily Harms is Readings’ Marketing Manager and is a regular insomniac in her spare time.