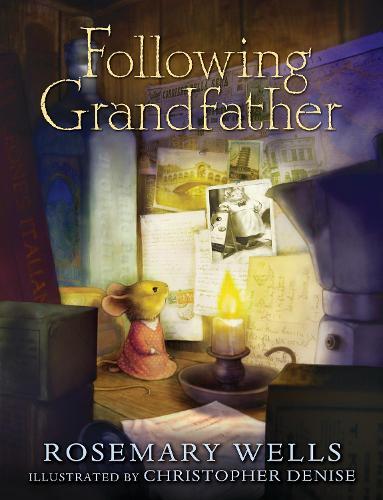 Invisible to humans exists a parallel world of mice - where young Jenny misses her cherished grandfather so much that she begins to see him everywhere. Jenny is as close to her grandfather as a small mouse can be. Grandfather shows Jenny how to button her buttons and how to write her name. He passes along to her the secrets of making the best lasagne in all of Boston. And during long, shared days at Revere Beach, Grandfather teaches Jenny the names of the seashells they find washed up on shore. When Grandfather is all of a sudden gone one day, the hole he leaves behind is too great for Jenny to fathom. Isn’t that him turning a corner, sitting on a bench, heading for the pier, walking along their beloved beach? Jenny runs after the familiar silver whiskers, hoping…Rosemary Wells peels back the layers of grief to reveal, at its core, something as exquisite and achingly beautiful as the rare and storied queen’s teacup seashell. Christopher Denise illustrates mid-century Boston with affection, and a mouse and her grandfather with gentle humor and unabashed sympathy.