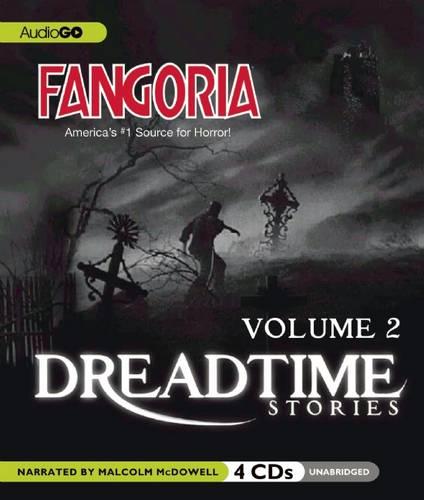 Fangoria’s Dreadtime Stories are fully dramatized radio dramas to thrill you and chill you! These original short stories from bestselling authors are now available for the first time in a collector’s edition with extended scenes. A Heated Premonition Based on the famous short story August Heat by W.F. Harvey, A Heated Promotion is the story of two men whose glimpses, each of the other’s possible future, lead them to a strange and paralyzing standoff. The Dark Enforcer Tired of being bullied, a comic book store owner summons The Dark Enforcer, mighty protector of the oppressed, to vanquish his enemies. Table Scraps Most politicians would kill for a high approval rating. The powerful Lorrimer family doesn’t need your approval–but they kill anyway. Conspiracy expert Isaac Salt is determined to uncover all the Lorrimer’s secrets, even if it means sneaking onto their private island. But what’s waiting for him there is the last thing he expects. Mercy Mercy Mathers looks like a blonde angel, but everyone knows she’s the wildest party girl in Clarion High. But when her boozy, slutty antics cause the death of nearly the entire high school football team’s starting lineup, Mercy seeks forgiveness by way of religion. Once she’s saved, Mercy feels compelled to save the bad boys she once sought out for her own pleasure. But bad boys tend to be bad, and to prevent them from backsliding, Mercy has to sacrifice them before they can fall from grace. But what guy would ever guess that the sexiest, most beautiful girl in school is a homicidal maniac on a mission from God? Talking in the Dark Victor Rippon is a lonely man from a small town. Ever since his wife left him, he lives a quiet, bleak existence, with no friends to speak of. His only real interest is his favorite writer, Rex Christian. Victor is obsessed with Rex’s horror stories, which somehow seem more real to him than his own boring life. Why do Rex’s stories have such hypnotic power over his readers? As Christmas draws near, Victor has a chance encounter with Rex and learns the answer to this and the age-old question: Where does a writer really get his ideas? The Final Battlefield After a four-year tour of duty in Vietnam, Private Daniel Conway is glad to be home in Clover Ridge, Iowa. But his joy is short-lived–he is being haunted by frightening visions of the Hangman, a vicious Viet Cong officer with a penchant for torture. Pushed to the brink of madness by the continual appearances of his tormentor, Daniel is forced to ask himself an unthinkable question: Has the Hangman followed him home?