Stink and the Midnight Zombie Walk 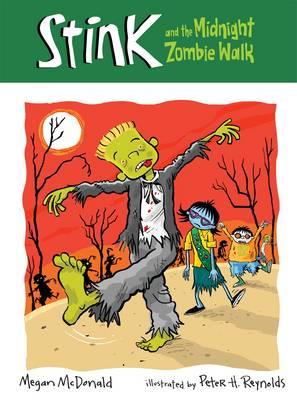 Stink and the Midnight Zombie Walk

Reading is UNdead! Everyone has zombies on the brain as Stink’s school and a local bookshop cook up a frightfully fun Main Street event. Guts! Brains! Eyeballs! There’s only one week before the new book in the Nightmare on Zombie Street series comes out. Of corpse Stink will be first in line at the Blue Frog Bookstore to buy his copy and join the town’s Midnight Zombie Walk! Until then, Stink and his friends keep busy making ketchup-stained zombie costumes, trying to raise money to buy the book and racking up points for Virginia Dare School’s race to one million minutes of reading. But with all that talk about the undead, Zink - that is, Stink - starts to wonder: is he being hunted by zombies? He does have a very delicious - er, superb - brain, after all. Readers will just have to open ze book and zee! Mwa ha ha ha! This is Book 7 in the popular series starring Stink Moody (aka Judy Moody’s little brother). The Virginia Dare School’s race to One Million Minutes of Reading will echo reading campaigns in many schools and libraries around the country. This is one of the best pro-book, pro-library, pro-bookshop lines ever! In the words of Principal Zombie (aka Principal Tuxedo), I hereby officially declare reading is UNdead!