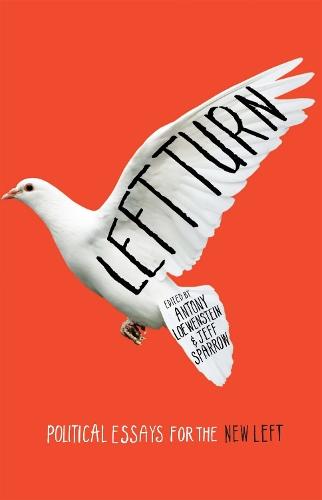 In the Australian election of 2010, more than a million voters chose not to cast a ballot. Of those who did vote, almost 730,000 voted informal. The figures provide a statistical confirmation of what had already become apparent during the campaign - namely, that vast numbers of Australians find the policies of neither major party appealing. And the million-and-a-half votes for the Greens show that many of those people are now prepared to countenance ideas to the Left of the two-party consensus.
Left Turn is a book aimed at such people, at the many, many Australians disillusioned with the political process. It includes controversial, topical and challenging essays by writers and thinkers who openly identify with the Left - from Larissa Berendht to Christos Tsiolkas, Lee Rhiannon to Nazeem Hussain, and editors Antony Loewenstein and Jeff Sparrow. They do not all agree with each other; they do not present a complete package or a consistent manifesto. But they do open some windows in Australian public life and let some much needed fresh air in.
Left Turn shows why the Left should be taken seriously.  It is neither a policy document for a political party or a comprehensive list of ways to improve Australia. The essays are passionate, relevant, radical, controversial and topical; voices that are dying to be heard in an increasingly barren, media landscape.

I ran into Antony Lowenstein (left) at the Sydney Writers Festival and mentioned I was reviewing this collection of essays. ‘You have to remember Mark, that it’s not a manifesto and it doesn’t present a program; it’s a collection of interesting ideas that don’t necessarily get aired or discussed.’

Lowenstein and his co-editor hope it generates debate and Chris Graham’s essay, ‘Violence, Non Violence and Aboriginal Australia’ will be sure to be attacked. Graham argues that Aboriginals are daily subjected to violence and that violent reactions by Aboriginal communities may not only be justified but politically necessary. He cites the famous Doomadgee case where it was only an organised attack by the community on the local police that exposed the flawed inquiry into Doomadgee’s death.

Greens Senator Lee Rhiannon ponders the future direction of the Greens in the face of declining Labor votes and how it copes with differences within the party and deals with the prospect of, at times, supporting minority governments whose agendas may differ from theirs. Also at issue is how a party that was born out of environmental battles can develop policies that are more broadly-based and an ‘organic part of progressive movements’.

In one of the more interesting essays, Jeff Sparrow looks at the decline of Left politics in the context of the Occupy movements in societies where the market becomes the default setting for most organisational relationships. In the Occupy movement, Sparrow sees some hope for the politics of the left in that its utopian anarchic representation raises the question of what kind of world lies on the other side of neoliberalism.

Some of this is echoed by Christos Tsiolkas who questions the smugness of the affluent left and their attitudes to Howard’s battlers who are suspicious of multiculturalism, migrants and refugees. Unless progressive politics can involve these communities, then they are not progressive.

The essays cover a broad range of issues including the media, refugees, economics, gender issues and industrial relations. It is to the editors’ great credit that they have managed to pull together such a range of provocative commentary that will stimulate and lead to further debate and discussion. For many people the markets do not provide the answer to achieving just, humane and equitable societies: what political and economic structures might?

Left Turn doesn’t provide the answers but it certainly raises some questions!

END_OF_DOCUMENT_TOKEN_TO_BE_REPLACED

Examines the ways the internet is threatening the rule of some of the planet's most repressive governments, including in countries such as Iran, Saudi Arabia, China, Cuba, Egypt and Syria. This book discovers the ways that Western...