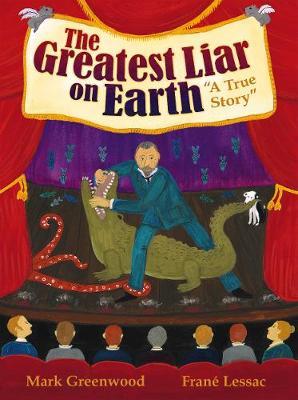 A true story by Mark Greenwood, illustrated by Frane Lessac. There is not a stir or a whisper when Louis de Rougemont steps onto the stage to recount his astonishing experiences. It is the most amazing story a man ever lived to tell - a breathtaking tale of catastrophe and miraculous events. But critics say he is an impostor with a gift for ripping yarns. Are Louis’s tales true? Or is he the greatest liar on earth?

If somebody told you they’d seen a flying wombat, and that they’d been welcomed by a tribe of cannibals, you might call them a liar.

The Greatest Liar on Earth is the story of one such man: Louis de Rougemont, a man who wowed the world with his tall tales of adventure during the late 1800s. This picture book from Australian author/illustrator team Mark Greenwood and Frané Lessac brings to life de Rougemont’s rise to fame and eventual fall from grace. He was once named ‘The Most Remarkable Man of the Century’, had an audience with the queen, and even saw his likeness in wax at Madame Tussauds, but when crowds began to question the truth of de Rougemont’s exploits, it all began to unravel.

Greenwood and Lessac have chosen a fascinating subject for their latest project, having collaborated previously on titles such as Simpson and His Donkey and Ned Kelly and the Green Sash. de Rougemont’s claims to fame will have readers five and up enthralled, and the handy fact section at the back will spark conversations about whether the tales were true, or whether he was just the Greatest Liar on Earth.

END_OF_DOCUMENT_TOKEN_TO_BE_REPLACED

The Dog on the Tuckerbox