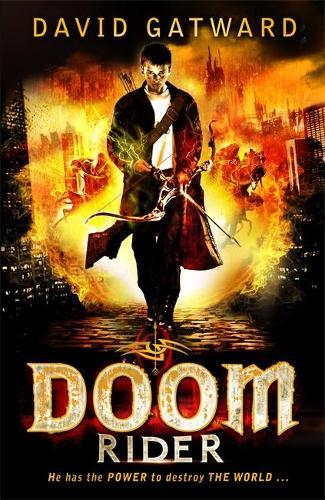 Seth Crow has lived a thousand lives, and in each one he’s been murdered before he turns thirteen. And now he’s being hunted again. But this time it’s different. Enter Lily, who tells him of his fate: Seth is CONQUEST. The first of the four riders of the Apocalypse. And people want him dead, before he can fulfil his destiny. Seth’s only hope lies in finding the other riders - Strife, Famine and Death. Together, the fate of the world lies in their hands … ‘Complete adrenalin rush. Dystopian meets horror - grabs you by scruff of neck & does NOT let go.’ Lee Weatherly, author of the ANGEL series

Most 13-year-olds probably aren’t out foretelling the end of the world, but then again, Seth Crow isn’t like other kids his age. He’s been dragged around from one religious festival to the next by his parents as they perform their travelling doomsday show. Seth’s alter ego ‘Apocalypse Boy’ is the star of the show, handing down his predictions of the end times. Then he meets Lily, who shows him a bleak future he never could have predicted.

After tragedy strikes Seth, Lily hands him the *really *bad news: it turns out that Seth is none other than Conquest, one of the four riders of the Apocalypse. Since it’s his job to bring about the end of the world, some very well-connected and dangerous people want him dead. The only chance he has at survival is to find the other three riders – Strife, Famine and Death. But how can he hope to succeed against the god-like Protector and his Chosen?

Doom Rider is a truly original take on the horsemen of the apocalypse tale, and one framed by a world of religion taken to extremes. As with Gatward’s previous series, The Dead trilogy, this is high-action stuff, and definitely for the horror fans out there. The scary elements are sure to hook even the most reluctant readers, and the compelling story will keep them going.

The Apocalypse is coming. And the only ones who can save the world, hold the power to destroy it.