To Love, Honour and Betray: Till Divorce Us Do Part, Library Edition 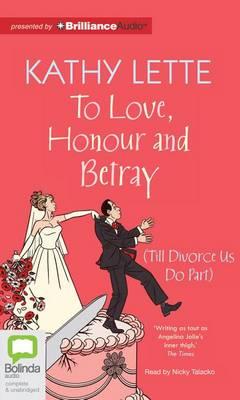 To Love, Honour and Betray: Till Divorce Us Do Part, Library Edition

When Lucy’s husband of eighteen years runs out on her, she’ll do anything to win him back. Including climbing out of her bedroom window at one in the morning wearing her daughter’s mini skirt. Jasper has left Lucy for her best friend, the chic and thin interior decorator Renee. To make matters worse, her teenage daughter Tally, blames her Mum. While Tally is busy trying to find a loophole in her birth certificate so she can put herself up for adoption, Lucy tries to accept that a child is for life and not just for Christmas. Although a signed-up member of Underachievers Anonymous, in Lucy’s quest to win back her husband she learns to be a surf life-saver, loses weight and gets a job. She also falls in lust, finding herself torn between an older and a much younger man. But it’s not until Lucy makes the Freudian discovery that her toy boy is also dating her daughter - and that he’s been paid to do so by her conniving ex as ammunition for a custody battle, that she finally learns to stand on her own two stilettos.