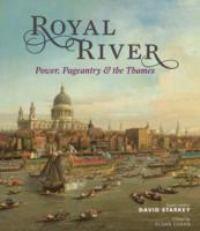 This lavishly illustrated catalogue, published to accompany the major exhibition at the National Maritime Museum, Greenwich, in 2012, explores the history of the Thames as a stage for Royal power, celebration and symbolism. It provides a thematic overview of major events and key individuals from the Tudor age onwards. Dr David Starkey, the leading authority on Britain’s royal history, is the exhibition’s guest curator. Dr Starkey and other experts examine the history of the Thames, London’s greatest ‘street’ . The book includes colourful and sometimes unexpected stories of royal arrivals, coronations and marriages; the Lord Mayor’s Procession and London’s ancient livery companies; ship launches and bridge openings; frost fairs and boat races; and the solemn splendour of Lord Nelson’s funeral procession. SELLING POINTS: Published to accompany a major exhibition at the National Maritime Museum, Greenwich, in 2012 Illustrated throughout with nearly 300 colour images of objects drawn from major collections, including those of Her Majesty The Queen. Many of the objects, some never seen in public before, have been specially photographed for this book 208 colour illustrations