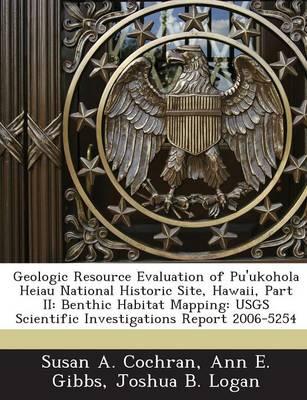 Introduction In cooperation with the U.S. National Park Service (NPS), the U.S. Geological Survey (USGS) has mapped the underwater environment in and adjacent to three parks along the Kona coast on the island of Hawaii. This report is the second of two produced for the NPS on the geologic resource evaluation of Puukohola Heiau National Historic Site (PUHE) and presents benthic habitat mapping of the waters of Kawaihae Bay offshore of PUHE. See Part I (Richmond and others, 2006) for an overview of the regional geology, local volcanics, and a detailed description of coastal landforms in the park. PUHE boundaries do not officially extend into the marine environment; however, impacts downslope of any activity in the park are of concern to management. The area of Kawaihae Bay mapped for this report extends from the north edge of the U.S. Coast Guard Reservation north of Kawaihae Harbor approximately 3.5 km south to the north edge of the Mauna Kea Golf Course and Beach Resort at Waikoloa and from the shoreline to depths of approximately 40 m (130 ft), where the fore reef drops off to the sandy shelf. The waters of smaller Pelekane Bay directly offshore of the park, while not formally under NPS jurisdiction, are managed by the park under an agreement with the State. This embayment is described in greater detail because of its special resource status. PUHE lies within the Kawaihae watershed, which contributes 75 percent of the drainage in the northern portion of the study area; the Waikoloa/Waiulaula watershed contributes 25 percent in the southern portion of the study area. Drainages from these watersheds into the study area include Makahuna, Makeahua, Pohaukole, Kukui, and Waikoloa/Waiulaula Gulches. The Waikoloa/Waiulaula Gulch is the only perennial stream with a year-round water flow. Only during periods of extreme rainfall will water flow in the Makeahua and Pohaukole gulches, merge together in the park, and empty directly into Pelekane Bay. In the late 1950s the reef off of PUHE was dredged to construct Kawaihae Harbor. Coral rubble was used in the construction of causeways and a revetment wall surrounding the commercial harbor. In the late 1960s the reef near Pelekane was blasted to create a small-boat harbor adjacent to the larger commercial harbor. Damage from these activities, in addition to a change in circulation patterns, has led to problems of high turbidity in Pelekane Bay.