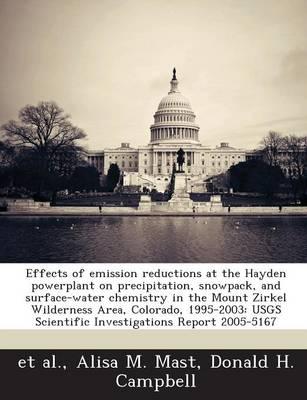 Precipitation, snowpack, and surface-water samples collected during 1995-2003 were analyzed to evaluate the effects of emission reductions at the Hayden powerplant on water chemistry in the Mount Zirkel Wilderness Area. The Hayden powerplant, one of two large coal-fired powerplants in the Yampa Valley, was retrofitted with control systems during late 1998 and 1999 to reduce emissions of sulfur dioxide and nitrogen oxide–the primary precursors of haze and acidic precipitation. The U.S. Geological Survey, in cooperation with the Colorado Department of Public Health and Environment, evaluated three water-chemistry data sets: wet-only precipitation chemistry from the National Atmospheric Deposition Program, snowpack chemistry from the Rocky Mountain snowpack network, and surface-water chemistry from a U.S. Geological Survey long-term lakes monitoring program. Concentrations and deposition rates of selected constituents were compared for the periods before and after emission reductions at the Hayden powerplant. Data collected during 1995-98 were used to represent the pre-control period, and data collected during 2000-2003 were used to represent the post-control period.