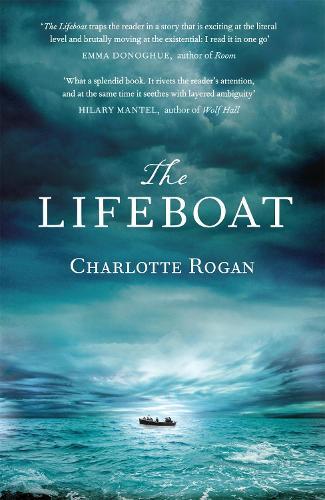 I was to stand trial for my life. I was twenty-two years old. I had been married for ten weeks and a widow for six. In the summer of 1914, the Empress Alexandra, a magnificent ocean liner, suffers a mysterious explosion on its voyage from London to New York City. On board are Henry Winter, a rich banker, and his young new wife, Grace. Somehow, Henry manages to secure a place in a lifeboat for Grace. But the survivors quickly realize it is over capacity and could sink at any moment. For any to live, some must die. As the castaways battle the elements, and each other, Grace watches and waits. She is a woman who has learned the value of patience - her journey to a life of glittering privilege has been far from straightforward. Now, she knows, it is in jeopardy, and her very survival is at stake. Over the course of three perilous weeks, the passengers on the lifeboat plot, scheme, gossip and console one another while sitting inches apart. Their deepest beliefs about goodness, humanity and God are tested to the limit as they begin to discover what they will do in order to survive. The Lifeboat is a page-turning story of moral dilemmas, and also the moving and haunting story of Grace, a woman as unforgettable and complicated as the story she recounts.

Twenty-two-year-old Grace is on trial for her life, after surviving on a lifeboat in the Atlantic for three weeks. Newly married and honeymooning with her dashing husband Henry on the luxurious ocean liner, the Empress Alexandra, Grace was full of hope for their future when an explosion on board the ship forced Henry to place Grace on one of the few overcrowded lifeboats available.

Now being tried, along with two other women who had been on the lifeboat, Grace must explain how she survived on that boat when so many others didn’t. What was Grace’s role in forcing Hardie the sailor who was commanding the lifeboat overboard? Did she or didn’t she fight off other passengers from the ship who were trying to get onboard the lifeboat as the ship sank?

Set in 1914, two years after the sinking of the Titanic, The Lifeboat is like a Lord of the Flies with grown-ups. Like the characters in that classic, Grace and her fellow survivors start off with the common goal of survival but very quickly divide into factions. With barely enough room for all of them, and the lifeboat riding low in the water because of the weight, they resort to plotting and violence to stay alive and condemn others to death.

The most intriguing aspect of this novel is the fact that we are told the whole story through Grace’s eyes, and it quickly becomes apparent that she is no angel. But how far has she gone to save her own life? This is a powerful debut novel; the descriptions of the days at sea are vivid and often harrowing, and Grogan’s depiction of the psychological deterioration on board the lifeboat is insightful and raw.