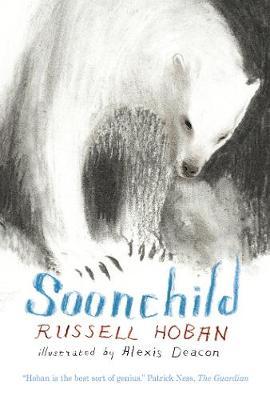 Hoban is the best sort of genius. Patrick Ness, The Guardian Somewhere in the Arctic Circle, Sixteen-Face John, a shaman, learns that his first child, a soonchild, cannot hear the World Songs from her mother’s womb. The World Songs are what inspire all newborns to come out into the world, and John must find them for her. But how? The answer takes him through many lifetimes and many shape-shifts, as well as encounters with beasts, demons and a mysterious benevolent owl spirit, Ukpika, who is linked to John’s past…

‘Hoban is the best sort of genius,’ says the quote from Patrick Ness on this strange, mindblowing book. A story from the north, where Sixteen Face John, unwashed and paunchy, a shaman who has lost his way and settled for TV and Coke, is about to take the journey of a lifetime.

Soonchild, in his wife’s belly, won’t come out. She needs her World Song handed on to her and John has lost it. So he must find his way back to the spirit world of the animal and bird brothers – the owl, the walrus, the polar bear – and fight the ghost wolves, the time loop and the great Swallower. Strange, yes. But utterly compelling and Alexis Deacon’s illustrations just belong. As Russell Hoban tells us, there is a bit of north in us all. For boys especially, 13 to ancient. Wonderful.