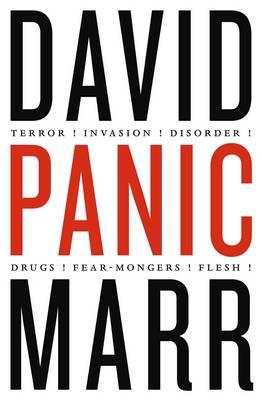 PANIC (NOUN). A SUDDEN UNCONTROLLABLE FEAR OR ANXIETY, OFTEN CAUSING WILDLY UNTHINKING BEHAVIOUR. AUSTRALIANS SEE THEMSELVES AS A RELAXED AND TOLERANT BUNCH. BUT SCRATCH THE SURFACE AND YOU’LL UNCOVER AN EXTRAORDINARY LEVEL OF FEAR. Cronulla. Henson. Hanson. Wik. Haneef. The boats … Panic shows all of David Marr’s characteristic insight, quick wit and brilliant prose as he cuts through the froth and fury that have kept Australia simmering over the last fifteen years. ‘Turning fear into panic is a great political art- knowing how to stack the bonfire, where to find the kindling, when to slosh on a bucket of kero to set the whole thing off with a satisfying roar … These are dispatches from the republic of panic, stories of fear and fear-mongering under three prime ministers. Some chart panic on the rise and others pick through the wreckage left behind, but all grew out of my wish to honour the victims of these ugly episodes- the people damaged and a damaged country.’ - DAVID MARR