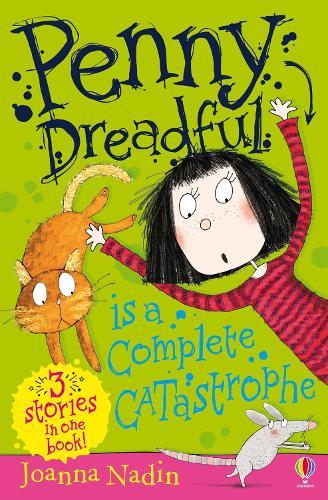 Penny Dreadful is a magnet for disaster. Starring in three brand-new stories, Penny creates mishap, mayhem and misadventure wherever she goes!Ages: 8+ Penny Dreadful and the Rat - Penny is charged with looking after Rooney the class rat for the weekend to learn about responsibility. But when the only thing she’s responsible for is losing Rooney, and the class is overrun with rat babies thanks to Rooney’s secret replacement, she’s in big trouble - again.Penny Dreadful’s Show-and-tell - Penny has always wanted to win a gold star for show-and-tell, but strangely showing a dead wasp hasn’t done the trick. So she decides to dig for buried treasure and amazingly discovers a two-headed dinosaur skeleton! Only when her neighbour arrives back from holiday to discover that someone has dug up his beloved pets, he’s not happy at all… Penny Dreadful and the CAtastrophe - When Gran ends up in hospital on her birthday thanks to Penny’s patented burglar trap, Penny is determined to cheer her up with a visit from Barry the cat (and a half-eaten Battenberg cake). But Barry is not too keen on the idea - and neither is beady-eared Sister Goggins.Get ready for a taste of destruction with this second side-splitting trio of tales of trouble. Penny Dreadful would have even Minnie the Minx running for cover. Nothing is safe when she’s around.Ages: 7+

END_OF_DOCUMENT_TOKEN_TO_BE_REPLACED

Penny Dreadful is a magnet for disaster. After Bridget Grimes shows off her collection of Brownie badges in assembly, Penny and Cosmo decide that they are also going to do their best and try to help. But when their attempt to help...

My name is not actually Penny Dreadful. It is Penelope Jones. The 'Dreadful' bit is my dad's JOKE. But I do not see the funny side. Plus it is not even true that I am dreadful. It's just that sometimes my BRILLIANT IDEAS don't...

My name is not actually Penny Dreadful. It is Penelope Jones. The 'Dreadful' bit is my dad's JOKE. But it is not even true that I am dreadful... honest.