We are the Champions: The Politics of Sports and Popular Music 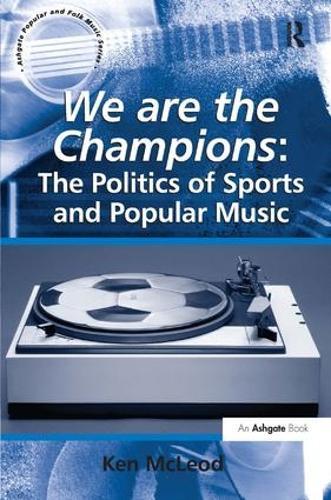 We are the Champions: The Politics of Sports and Popular Music

Sports and popular music are synergistic agents in the construction of identity and community. They are often interconnected through common cross-marketing tactics and through influence on each other’s performative strategies and stylistic content. Typically only studied as separate entities, popular music and sport cultures mutually ‘play’ off each other in exchanges of style, ideologies and forms. Posing unique challenges to notions of mind - body dualities, nationalism, class, gender, and racial codes and sexual orientation, Dr Ken McLeod illuminates the paradoxical and often conflicting relationships associated with these modes of leisure and entertainment and demonstrates that they are not culturally or ideologically distinct but are interconnected modes of contemporary social practice. Examples include how music is used to enhance sporting events, such as anthems, chants/cheers, and intermission entertainment, music that is used as an active part of the athletic event, and music that has been written about or that is associated with sports. There are also connections in the use of music in sports movies, television and video games and important, though critically under-acknowledged, similarities regarding spectatorship, practice and performance. Despite the scope of such confluences, the extraordinary impact of the interrelationship of music and sports on popular culture has remained little recognized. McLeod ties together several influential threads of popular culture and fills a significant void in our understanding of the construction and communication of identity in the late twentieth and early twenty-first centuries.