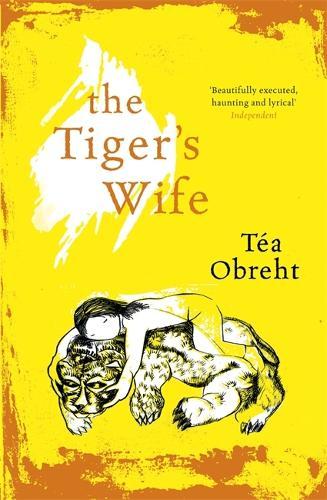 Having sifted through everything I have heard about the tiger and his wife, I can tell you that this much is fact: in April of 1941, without declaration or warning, the German bombs started falling over the city and did not stop for three days. The tiger did not know that they were bombs…
A tiger escapes from the local zoo, padding through the ruined streets and onwards, to a ridge above the Balkan village of Galina. His nocturnal visits hold the villagers in a terrified thrall. But for one boy, the tiger is a thing of magic - Shere Khan awoken from the pages of The Jungle Book.
Natalia is the granddaughter of that boy. Now a doctor, she is visiting orphanages after another war has devastated the Balkans. On this journey, she receives word of her beloved grandfather’s death, far from their home, in circumstances shrouded in mystery. From fragments of stories her grandfather told her as a child, Natalia realises he may have died searching for ‘the deathless man’, a vagabond who was said to be immortal.
Struggling to understand why a man of science would undertake such a quest, she stumbles upon a clue that will lead her to a tattered copy of The Jungle Book, and then to the extraordinary story of the tiger’s wife.

I returned from my Christmas holidays knowing that with The Tiger’s Wife, I had just read my book of the year. And my euphoria hasn’t subsided since: I’m happily reading the novel a second time, and, as I write, I note with delight that Obreht has just made the cover of the New York Review of Books, and, over at the New York Times, has received the thumbs-up from the inimitable Kakutani (among many other glowing notices). And this a debut novel, by a 25-year-old no less! I think it’s an interesting question – do you, dear reader, perhaps wonder whether all of this might just be hype?

I can only share my personal discovery of this author. Hearing about her forthcoming novel late last year, and noting that she was picked by the New Yorker as one of the ‘20 Best American Writers under 40’, I decided to read one of her short stories ( ‘The Laugh’, which handily appeared in last year’s Best American Stories collection). It involved an African safari trip from memory, and it wasn’t as though it was the greatest story I had ever read in my life, but I do remember being transfixed by its dynamics and its rendering of place, and thinking – as I did when I first read Nam Le – how does Obreht know all this stuff??

So the process of writerly seduction had already begun – but I still had no concept of the masterpiece Obreht had in store for me with this novel. We are in a Balkan country; precisely where is not defined, but it suits a tale where ‘reality’ is a slippery thing, and legends and superstitions seem to carry more weight than the historical record. A young doctor, Natalia Stefanovic, travels across the border on behalf of a charity to administer inoculations at a poverty-stricken orphanage in a remote village (in one of this narrative’s occasional piercing asides, Natalia notes the irony that it was her country that made these children orphans). Not too far away, her beloved grandfather has gone away to die, without even informing his wife that he is sick. Natalia is puzzled – she knew of his illness, but at the moment of his greatest need, why did he go elsewhere? Could the story he used to tell her of his encounter with ‘the deathless man’ be at all relevant? And why is a woman in his native village called ‘the tiger’s wife’?

In the re-telling of these fables, which Natalia explores anew in the quest of the truth about her grandfather, her love for him gradually becomes a clear-eyed reckoning with her homeland: his greatest gift to her. The sombre realisation that collective historical memory can actually occlude truth and perpetuate conflict and misunderstanding – and that it is only by being attentive to our stories that we can truly connect with one another – is the book’s greatest achievement. And what extraordinary storytelling! The experience of reading it brought back for me the long-ago excitement of first reading Garcia Marquez’s 100 Years of Solitude. The Tiger’s Wife is a thrilling novel, one that I believe will be read, talked about, and passed on like some kind of talisman for many years to come.

END_OF_DOCUMENT_TOKEN_TO_BE_REPLACED

Winner of the Orange Prize for Fiction 2011!