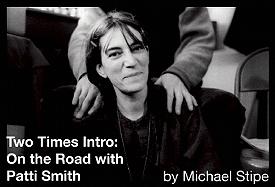 In Stipe’s startling photographs and 12 brief written homages, Patti Smith is depicted as a down-to-earth goddess, a part of and apart from her evolving entourage of musicians, artists, poets (Allen Ginsberg makes an appearance), and friends. This isn’t a traditional book of portraits … The overwhelming mood is one of disjunction, claustrophobia, exhaustion, temporariness–and the effect is raw and intimate … And [Stipe] is no longer the dork nerd teenager, but a fellow musician – and from his proud, caring mien, even a protector. –Publishers Weekly An energetic and gracious tribute to not only a great artist, but also to a powerful moment in her oeuvre – and to those who contributed to it and shared in it. –New York Journal of Books Stipe’s personal friendship lends something greater to the overall vision of this book. It isn’t simply a set of snapshots of performances, rather a collection of rare moments. The personal nature of the anthology makes it all the more enticing and enjoyable. Smith, in all her glory and awe-inspiring talent, is portrayed in the truest light. –Verbicide Magazine A fascinating book … including appearances by Allen Ginsberg, Gregory Corso, Tom Verlaine, the members of Sonic Youth and more … and the short text tributes to Smith by these people, scattered throughout the manuscript, are well worth your time. –Chicago Center for Literature and Photography This book comprises Michael Stipe’s intimate and evocative photos of Patti Smith on tour in 1995, along with other cultural celebrities who appeared with her, such as Allen Ginsberg. In addition to text by Stipe, William Burroughs, and Patti Smith, there is also commentary from Thurston Moore, Kim Gordon, Lenny Kaye, Tom Verlaine, and more. Michael Stipe is a singer, photographer, film producer, and activist. He lives in Athens, GA, and New York, NY. R.E.M. formed in 1980 in Athens, GA, and is composed of Peter Buck, Mike Mills, and Michael Stipe. Heralded by Rolling Stone as America’s Best Rock and Roll Band, R.E.M. rose from cult college radio status to sell more than seventy million albums worldwide and was inducted into the Rock and Roll Hall of Fame in 2007.