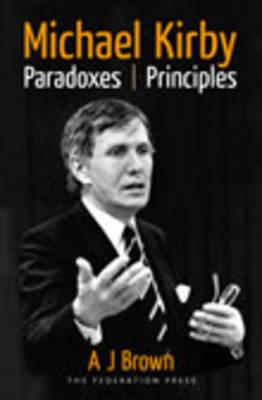 Front cover image: Michael Kirby speaking c.1988 (Adelaide Advertiser). 2012 Prime Minister’s Literary Award - short-listed in the non-fiction category of this prestigious Award. 2012 National Biography Award - one of the six titles shortlisted for Australia’s pre-eminent prize for biographical writing and memoir. 2011 Walkley Book Award Finalist Watch our author AJ Brown in conversation with Michael Kirby at this Australian National University event from May 2011: The remarkable story of the life and work of Australia’s most famous modern judge. This biography charts Michael Kirby’s extraordinary public life from his first forays as a student politician in the early 1960s, to his appointments as foundation chairman of the Australian Law Reform Commission in 1975, President of the NSW Court of Appeal in 1984, and Justice of the High Court of Australia (1996-2009). Internationally, Kirby has been a leader in law reform and human rights with the OECD, UNESCO, UN Human Rights Commission and the WHO Global Program on AIDS. He is a former world president of the International Commission of Jurists, and in 1993-1996 was the first Australian to serve as a Special Representative of the UN Secretary-General for Human Rights. A J Brown reveals Kirby’s difficult and often challenging personal path as judge, public intellectual and gay man. He shows the sharp contrast between Kirby’s 30-year love affair with controversial public issues and the reality of a man whose underlying message is deeply traditionalist - that people should have faith in the status quo of political institutions, even the monarchy. He shows also how Kirby’s most constant companion - publicity - has been a double-edged sword. Behind his active courtship of an unprecedented judicial profile lay a passion for principles and the social relevance of the law, but it drove him into fierce conflict with the many judges and politicians who questioned whether such celebrity was compatible with judicial life. The slow coming together of his personal, professional and public lives culminates in sharp moments of truth - for Kirby, for powerful institutions, and for a society learning to cope with the challenges of change. The research has included: Exclusive access to over 117 metres of personal and official papers, dating back to the 1940s Interviews with more than 30 of Michael Kirby’s closest relatives and colleagues Independent research into how falsified records came to be used in Parliament in a direct attack on a High Court judge, and Unprecedented access to the working materials of a High Court judge, including draft judgments and papers normally shredded within judicial chambers.

END_OF_DOCUMENT_TOKEN_TO_BE_REPLACED

Michael Kirby is one of Australia's most admired public figures. At a time of spin and obfuscation, he speaks out passionately and straightforwardly on the issues that are important to him. Even those who disagree with him have...

Appealing to the Future: Justice Michael Kirby & His Legacy (Softcover)

Covers a wide variety of legal topics, but underpinning them all is an exploration of Justice Kirby's values - how they have shaped his judgements and interests and how they have evolved over the years to make him one of...

A biography that charts Michael Kirby's extraordinary public life from his first forays as a student politician in the early 1960s, to his appointments as foundation chairman of the Australian Law Reform Commission in 1975,...