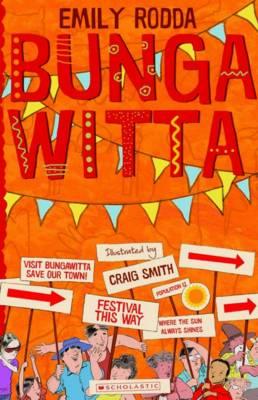 It’s crunch time in Bungawitta. The land’s as dry as a dead galah, there’s no rain in sight, and only twelve people left in town. Little Glory-Alice blames it all on the TV weatherman. Jay knows better. Nobody can make it rain. But a shower of money would help keep Bungawitta alive. And a festival would attract city tourists with money to spend, Jay’s sure of it. But can twelve people, two dogs and a Shetland pony put on a proper festival? Only time, and the ABC, will tell.

It hasn’t rained in Bungawitta in a very long time. So long, in fact, that the youngest person in town has only ever seen rain on TV. The animals have all left, the fields are dry, and one by one the people are leaving Bungawitta too. With only twelve people left in town, there’s not much else to do besides check the weather report, which never predicts rain.

But Bungawitta’s second youngest resident Jay decides he’s not just going to sit around staring at the dust – he’s going to do something about it. Bungawitta is also sorely lacking money, and since that’s easier to come by than rain, the locals hit on the idea to host an Earth Sculpture Festival. But Jay can’t help feeling unsure - once the bottled water has been put on ice, the portable toilets have been set up and the tea-cosies knitted, will anyone even show up? Or will this festival spell the end of Bungawitta?

This stand-alone junior reader from the phenomenally successful author of the Deltora Quest, Rowan of Rin and Rondo series is a real treat. You’ll laugh out loud at some of the antics of the Bungawitta locals, and fret along with them when things don’t go exactly as planned.

Bungawitta is a charming, heart-warming glimpse into what it’s like to live in a drought-affected area, and just exactly how much change one good idea can bring about. So make sure you pay a visit to Bungawitta, and don’t forget to pick up a tea-cosy!

Holly Harper is a children’s book specialist at Readings Carlton.

It's crunch time in Bungawitta. The land's as dry as a dead galah, no rain in sight, and only 12 people left in town. Nobody can make it rain. But a shower of money would help keep Bungawitta alive. A festival would attract city...

An adventure/mystery with a dash of the supernatural thrown in; The Truth About Verity Sparks is packed with chases through the dark alleys of London, seances in high-class dining rooms, pet pythons named Anthony and Cleopatra,...

The year is 1788, and in the newly created colony at Sydney Cove is struggling for survival. Seen through the eyes of the colony's only surgeon and Nanberry, the Aboriginal boy adopted by Surgeon White who finds himself...

A gripping time-slip adventure, in the tradition of Ruth Park's Playing Beatie Bow.