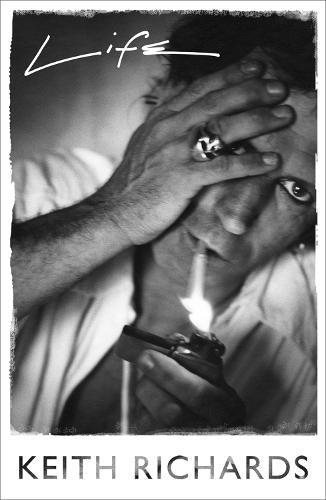 With the Rolling Stones, Keith Richards created the riffs, the lyrics and the songs that roused the world, and over four decades he lived the original rock and roll life: taking the chances he wanted, speaking his mind, and making it all work in a way that no one before him had ever done.
Now, at last, the man himself tells us the story of life in the crossfire hurricane. And what a life. Listening obsessively to Chuck Berry and Muddy Waters records as a child in post-war Kent. Learning guitar and forming a band with Mick Jagger and Brian Jones. The Rolling Stones' first fame and success as a bad-boy band. The notorious Redlands drug bust and subsequent series of confrontations with a nervous establishment that led to his enduring image as outlaw and folk hero. Creating immortal riffs such as the ones in ‘Jumping Jack Flash’ and ‘Street Fighting Man’ and ‘Honky Tonk Women’. Falling in love with Anita Pallenberg and the death of Brian Jones. Tax exile in France, wildfire tours of the US, ‘Exile on Main Street’ and ‘Some Girls’. Ever increasing fame, isolation and addiction. Falling in love with Patti Hansen. Estrangement from Mick Jagger and subsequent reconciliation.  Solo albums and performances with his band the Xpensive Winos. Marriage, family and the road that goes on for ever.
In a voice that is uniquely and intimately his own, with the disarming honesty that has always been his trademark, Keith Richards brings us the essential life story of our times.

The stories that fill these pages tell of love, anger, dispute, ingenuity, addiction and fame. Throughout all this, though, stands one constant - music and a complete and utter love and devotion for the artform. The book delves into the craft of songwriting and playing and how many songs were born. Of how, through his collaboration with Jagger, some of the most recognisable lyrics and riffs of the last forty years were created. His love of music, from listening as a child to Chuck Berry records to immersing himself in the blues is told with emotional candour. ‘Every other moment taken away from it (learning the blues) was a sin’.

Life reads like a snapshot of events, places and people. He remembers things clearly (at least as far as HE remembers!) and uses letters, notebooks and diaries to jog the memory into gear. He writes intelligently with a keen and clear observation of the times. His days on the neverending tour bus called The Rolling Stones and his often tempestuous relationship with Mick Jagger are the sharpest memories of all.

He tells of his affair with Anita Pallenberg (the mother of three of his children) and of falling in love with Patti Hansen with a brutal and touching honesty. You really do feel like you are sitting across the kitchen table from him.

‘Image is like a long shadow. Even when the sun goes down you can see it!’ This typifies Richards’ response to the mythology surrounding him. The consequences of his fame mean that people still see him as the image of the rebel, the main offender, the renegade. An image born of his exploits throughout the seventies, of a time of extreme fame and wealth, of intense addiction and of the weird and wacky rumours of full blood transfusions and the like. He has been off dope for thirty years but finds that particular image a difficult one to shed. His image aside, his is a life that mirrors the times he has lived in and the story of rock and roll itself.

His is a career born of doing things his own way. Others have tried to imitate but come up short and pale in significance to this complete original. Whatever way you look upon ‘Keef’ and his shenanigans, this is a great read!

END_OF_DOCUMENT_TOKEN_TO_BE_REPLACED

Once-in-a-generation memoir of a rock legend - the No. 1 SUNDAY TIMES bestseller.