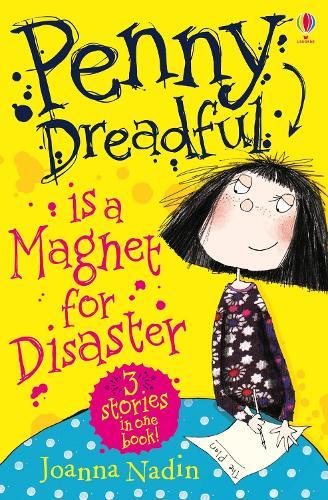 Penny Dreadful is a magnet for disaster. Starring in her first three stories, Penny creates mishap, mayhem and misadventure wherever she goes.Age: 7+ Penny Dreadful becomes a Hairdresser - Penny’s convinced her stint as a haredresser will quickly earn her enough money to pay back her debt to her mum. Armed with a Silent Strimmer, superglue, and under the watchful supervision of a sleeping Gran, what could possibly go wrong? Penny Dreadful and the Faithful Sidekick - After watching Animal SOS, Penny decides she needs a faithful sidekick to train. the abandoned dog outside the post office will have to do - but will an incident with a baby monitor, a tutu, and a Russian au pair land them in the doghouse? Penny Dreadful and the School Inspector - Mr Schumann, the headmaster, is keeping a close eye on the mischief-making Penny Dreadful during the school inspector’s visit. But when Penny’s best efforts to behave result in a mishap with a Jedi outfit and a swarm of locusts, is it the end for Penny’s school?Age: 7+

END_OF_DOCUMENT_TOKEN_TO_BE_REPLACED

Penny Dreadful is a magnet for disaster. After Bridget Grimes shows off her collection of Brownie badges in assembly, Penny and Cosmo decide that they are also going to do their best and try to help. But when their attempt to help...

My name is not actually Penny Dreadful. It is Penelope Jones. The 'Dreadful' bit is my dad's JOKE. But I do not see the funny side. Plus it is not even true that I am dreadful. It's just that sometimes my BRILLIANT IDEAS don't...

My name is not actually Penny Dreadful. It is Penelope Jones. The 'Dreadful' bit is my dad's JOKE. But it is not even true that I am dreadful... honest.