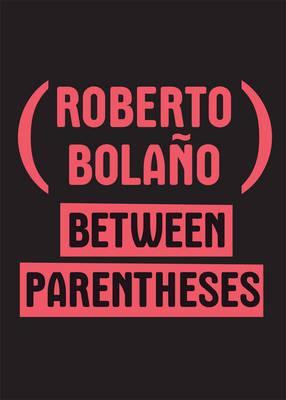 Between Parentheses collects most of the newspaper columns and articles Bolano wrote during the last five years of his life, as well as the texts of some of his speeches and talks and a few scattered prologues. Taken together, as the editor Ignacio Echevarria remarks in his introduction, they provide a personal cartography of the writer: the closest thing, among all his writings, to a kind of fragmented ‘autobiography’.
Bolano’s career as a nonfiction writer began in 1998, the year he became famous overnight for The Savage Detectives; he was suddenly in demand for articles and speeches, and he took to this new vocation like a duck to water. Cantankerous, irreverent, and insufferably opinionated, Bolano also could be tender (about his family and favorite places) as well as a fierce advocate for his heroes (Borges, Cortazar, Parra) and his favorite contemporaries, whose books he read assiduously and promoted generously. A demanding critic, he declares that in his ideal literary kitchen there lives a warrior: he argues for courage, and especially for bravery in the face of failure.
Between Parentheses fully lives up to his own demands: I ask for creativity from literary criticism, creativity at all levels.

Recently I have been reading a collection of little non-fiction pieces, written for various Spanish language newspapers or as acceptance speeches, by the Chilean novelist, Roberto Bolańo, who is dead now.

If he were still alive, he might find himself with little time to write anything but acceptance speeches, so loud and so various are the acknowledgements of his achievement. Bolańo is often praised as the most influential Latin American author since Marquez and as the natural heir to Borges. According to Colm Tóibin, Bolańo’s is the ‘very highest level of literary achievement’. For Jonathan Lethem, he ‘has proven that literature can do anything’. The final interview Bolańo gave before his death, (with the Mexican edition of Playboy), was conducted amid such sycophancy as to be almost unreadable.

Praise like this is entirely in keeping with Bolańo’s own generosity as a critic. For Bolańo, Pezoa Veliz is ‘without a doubt the quintessential minor poet of the Chilean Parnassus’. Nicanor Parra ‘the best living poet in the Spanish language’, Rodgrigo Rey Rosa ‘the best short story writer of his generation’, Gabriel Ferater ‘one of the best Catalan poets of the second half of the twentieth century’, Enrique Lihn ‘without doubt the best writer of his generation’ and Cesar Aira ‘one of the three of four best Spanish-language writers alive today’. This goes on, and one feels that, if one were to add them up, such claims must inevitably overlap each other, that two or more writers in Bolańo’s cannon must inevitable be the single greatest writer, and that contradicting himself is not something Bolańo cares too much about.

Bolańo’s gratuitous generosity has been adopted, in other words, by those who write about him, as if his enthusiasm was contagious. Which it is. Enthusiasm, a university lecturer once told me, is for amateurs. It is not the slightly abstract passion of the connoisseur, of the expert. This might well be true. Bolańo’s enthusiasm is childish, which is precisely why it is so infections, so endearing, and real. It is the enthusiasm of the young poet, for whom everything is a shock, alive and enormous: the great writers firstly whose dominion extends in all directions, and life itself which is calling from beyond the horizon, from the future. Unlike everyone else, Bolańo never grew up. He seemed to have maintained this energy, this obsessive curiosity, up until his death, at the age of fifty. Bolańo, whose natural territory is not the essay, (he tends towards the tangential, the chaotic) is a reader’s critic, rather than a critic’s critic. For him, the act of reading is always a matter of life and death.

END_OF_DOCUMENT_TOKEN_TO_BE_REPLACED

Nazi Literature in the Americas