Unbearable Lightness: A Story of Loss and Gain 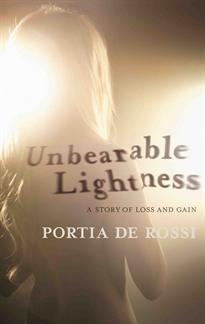 Unbearable Lightness: A Story of Loss and Gain

Born Mandy Rodgers just outside of Geelong, Portia de Rossi is one of Hollywood’s most intriguing and talked about stars. Finding early success in the Australian film Sirens, Portia went on to star in the hit television series Ally McBeal, as well as the cult hit Arrested Development, launching her Hollywood career - and eventual high-profile marriage to Hollywood mega-star Ellen DeGeneres. But behind her success, Portia was plagued by self doubt, depression, anorexia and bulimia. Starving herself and terrified of being ‘outed’ by the press, Portia lived a Hollywood nightmare for years. There is no lonelier place than living with an eating disorder. It forces you to hide from everyone out of fear that someone might see through your controlled exterior to the festering, flesh-eating disease that lurks just under the skin. I can’t express how shameful it is for the self-controlled over-achiever to find herself at a supermarket parking lot on the floor of the backseat of her car stuffing a succession of muffins in her mouth then vomiting in a plastic bag and dropping it into a trash can - all the while terrified that paparazzi were capturing the whole disgusting ritual. - Portia de Rossi Unbearable Lightness is the story of living with an eating disorder. It’s also Portia’s story of accepting her sexuality, coming out in Hollywood, marrying Ellen DeGeneres and what life is really like inside the Hollywood machine. Shockingly candid, outrageously funny, self deprecating and no holds barred, Unbearable Lightness is an extraordinary account of a Hollywood life not even the tabloids could make up.