Last week I went to see the second film instalment of Suzanne Collins' dystopian trilogy, The Hunger Games, on opening night and, as expected, found myself in a cinema full of enthusiastic teen fans. When the trailer for the upcoming adaptation of Divergent appeared on screen, my friend leaned over to me and said, ‘I think those girls behind us are hyperventilating.’ I patted his hand. ‘We’re among my people now,’ I said.

With almost double the budget as well as a new director in Francis Lawrence (no stranger to turning books into films), I had pretty high expectations for the Catching Fire adaptation - and I wasn’t disappointed. Like the very best book-to-films, this one builds something new and exciting on top of the original, taking ownership of the way the story is told. It’s a tough challenge because during the process certain complexities will inevitably get lost, but a good adaptation knows when to let go.

Here are some things the filmmakers got right this time (and a few they didn’t).

She’s not how I’d imagined Katniss when first reading the books but Lawrence’s portrayal of ‘the girl on fire’ is pretty amazing. The character of Katniss is a mass of contradictions - she’s unyielding yet soft-hearted, afraid yet brave - and with the books we’re dropped right in the middle of her unravelling mental state. With the movies we have to watch all of this unfold through Lawrence, through her expressions, tone, body language, and at the risk of sounding like everyone else, she is really, really good at conveying all these things, without seeming fake or melodramatic. Her performance brings the hot mess of emotions that is Katniss right to the surface and blows it out of the water and, as a result, Lawrence-as-Katniss feels more vulnerable than book-Katniss.

The first-person narrative of the books is wonderfully harrowing - claustrophobic, intense - but the movie benefits from throwing this approach aside and going with something different. In both films, I really loved the way we could see what was happening outside of the games as well as inside. All the little details that come up - such as the sinister meetings between new gamemaker (more on him later) and President Snow - are really fun to watch, even when they’re kind of silly and hammed up. I’m thinking of the scenes in which we see President Snow’s granddaughter wearing her hair just like Katniss or wanting to fall in love just like Katniss…

I’ve already read a few reviews that say the film thankfully plays the love triangle down, and from the outset there’s definitely less conversations about feelings, and it’s a relief to not have Katniss' inner monologue when she’s in the midst of the a make-out. But … this somewhat formulaic romantic entanglement still plays an integral role in the film, even if just for revealing how much the first game has changed Katniss, and consequently her relationship with Gale. You can easily picture how their romance may have progressed along a more straight-forward course were it not for the games. I’m not sure how successful the films have been at displaying this yet (in the book Katniss rages much more fiercely at losing her right to choose who she’ll marry) but I do think the relationship between Katniss and Peeta is much better-handled in Catching Fire than the first film. If you start thinking of them as an arranged marriage, it’s kind of tender and heartwarming to see them grow accustomed to one another.

Basically this love triangle deserves a mention for having been the inspiration of some very, very funny comics courtesy of Noelle Stevenson AKA Gingerhaze!.

The possibility that Philip Seymour Hoffman is actually just playing himself:

I barely remember TV host Caesar Flickerman from the books but when it comes to the films, Stanley Tucci performance as Caesar Flickerman is one of my favourite parts. He’s funny, grotesque and outrageously-attired. And he’s just one member of a truly rocking supporting cast. Elizabeth Banks shines as Effie and Woody Harrelson is terrific as Haymitch. There’s also Lenny Kravitz as rebellious fashion-designer Cinna (who creates some strangely sultry dynamics with Katniss on stage) Sam Claflin, Jena Malone and more.

What I really find most disappointing in the films is the way they’ve given little attention to (or just removed) injuries such as Peeta’s prosthetic leg, as I felt they could’ve done a lot more interesting things here. The film is exciting, adrenaline-fuelled and action-packed, but the cost with going down this route is that we lose the horror of what the games is, which is a powerful part of the books. Deaths happen so quickly (with little or no time for mourning) and I think that giving more attention to the severity of their injuries (as well as attempts to remove injuries and scars or hide them) would have been much more interesting.

I’m very interested to see how they translate Mockingjay for the screen as it’s quite dark and very different from the first wo. If you watched the film, you have a long wait ahead as they’ve annoyingly decided to split the film into two OR you can just skip the wait and read the book. 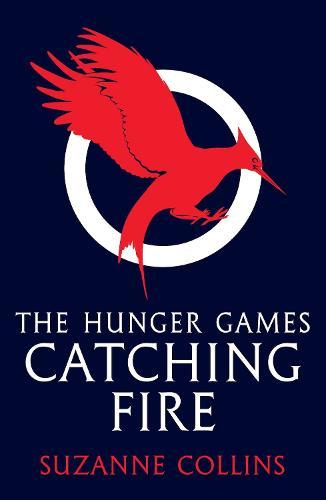