First-time novelist Toni Jordan has had an extraordinary 12 months. A year ago, Text Publishing’s Michael Heyward had just signed up her first novel, Addition. Since then, Text has sold rights into North America, the UK, Italy, France, Germany, the Netherlands, Portugal, Israel and the Czech Republic. It’s not all that surprising, then, that she has a contagious I-can-hardly-believe-my-luck kind of look on her face.

But Jordan’s journey is about more than luck; she has managed to incorporate a quirky main character into a narrative like those she admires – ‘easy to read, but well written’. Addition is the story of Grace, a woman whose obsession with numbers and counting things (letters in a name, poppy seeds in a piece of cake) seriously affects how she lives.

One day, on her usual routine, which is calculated down to the last minute, Grace meets Seamus and for the first time she is given a reason to attempt to live less peculiarly. It isn’t easy, though; she seeks help in the form of group therapy and medication, which gives her the sensation – comic for the reader – of having two brains. Things appear to be working well for a little while but as the story progresses we are forced to consider whether life is better being ‘normal’ by society’s standards, or if being true to yourself is more important. A humorous, romantic story set in a very recognisable Melbourne, it is the product of a fast and lively imagination. One of Grace’s fixations is Nikola Tesla, a real-life inventor born in 1856, whose counting obsession centred on the number three. Where did she get the idea of having a character who obsessively counts? ‘I really don’t know. My mum counts a bit… and I must admit that when I clean up, which is rarely, I invent these little cleaning games because it’s so boring.’

Some origins are easier to trace than others. Writing the scenes where Grace is in a local café in Glen Iris, Jordan had a specific place in mind, and her love of Melbourne is obvious as she extols the virtues of her home of nine years. ‘You really have to live somewhere else to realise how great it is here.’

A physiologist by training, an early sign of Jordan’s love of books can be traced back to when she was a teenager. After reading Crime and Punishment, she couldn’t get out of bed for three days. She laughs when asked if she’s serious. ‘Yes!’ Despite being so moved by literature, she studied science at university in Brisbane, where she grew up. She describes herself as a ‘nerd’ at school and attributes her work ethic to her family. ‘We were all very serious, working-class people. The goal in life is to get a good job and then you get long-service leave.’

The story of her journey from science nerd to novelist begins with a turning point. She was the marketing manager of a large vitamin company during the 2003 Pan Pharmaceutical product recall, when she saw an article about RMIT’s Professional Writing and Editing diploma. Did she hesitate? ‘No, I never hesitate,’ she says good-naturedly. ‘Jump first. Fix up all my mistakes later!’

She’d chosen to study non-fiction, editing and corporate writing, but she could do a fourth subject. For a bit of fun, she chose ‘Novel’. Having never before written anything creative, for six months she wrote 20,000 words of ‘horrible, autobiographical… throat-clearing garbage’.

Inspiration for Addition hit on a plane. ‘This woman just popped into my head – this really kind of obnoxious, counting, obsessive woman.’ That woman became Grace, and the excerpt that Jordan wrote on that plane was in the manuscript until the final edit.

While some writers struggle for decades, the novel Jordan began in 2004 is being published by the home of Kate Grenville and Helen Garner in 2008. And it’s hardly accidental. After listening to guest speaker Michael Williams (then working at Text), Jordan jokes that she ‘kind of stalked him’. She heard him speak at the Victorian Writers’ Centre and the Melbourne Writers’ Festival. She researched publishers, scrutinised Bookseller and Publisher, trawled writers’ blogs, and took part in a master class at Varuna. After Varuna, her writing ‘just went off like a rocket… you feel so validated, you feel like a writer’.

Jordan describes writing as ‘the greatest way’ to spend her time. ‘It’s like playing dolls in your head.’ When she began writing the character of the niece, she says, ‘my fingers typed “Larry” before I thought it … and when I saw it on the page, I thought that’s her name? Larry? What kind of a name is Larry for a girl? I had to work out why her name was Larry … Then I thought, it’s short for Hilary.’

2008 is set to be a big year. With appearances at writers’ festivals all around Australia, teaching writing at RMIT, and freelance copywriting, Jordan will be hard pressed to find time to start that second novel. She smiles. ‘The more I have to do, the more I fit in!’

Addition is published by Text Publishing. 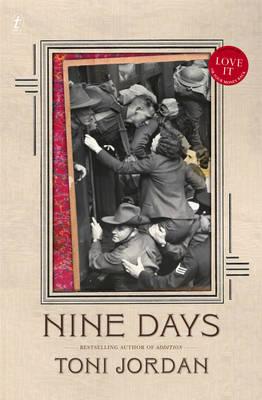